The available documentation about the Leeds Model Company and the original LMC catalogues offer a comprehensive view of the range of standard items produced by the company over the years. It is however more than probable that, certainly in the early years, the factory also made items which did not appear in the catalogues. After all, Leeds was also a company making models to order and producing specific items for exhibition layouts at large events.

This page is dedicated to such items. These are items from the collections of LMC aficionados of which we think they have been made at the factory. Do you recognise an item, or can you tell more about it? Then please share this knowledge by sending us an e-mail (use the contact button at the upper right hand corner). This will be forwarded to the owner of the item. Do you have an item which you think has been made by LMC but cannot be found in a catalogue? We will be pleased to add that to this page. A description and photograph (with a minimum width of 800 pixels) will suffice. Please use the contact button for this too.

This loco was never a catalogue item, but a drawing specifically with the loco name and number appeared in the 1935 catalogue (Drg. No. 139) and thereafter. The mechanism is a second series standard type with horseshoe magnet. These drawings in particular, provide a useful check in attempting to establish if a model is of LMC origin. If there is a drawing, and the model entirely has been build up with LMC parts, it almost certainly will be a factory made 'one off'.

Type B handmade wagons produced by LMC from the 1920s to early '30s. Most of these had a railway company livery, but this in a 'Leeds Model Co' livery, masquerading as a private owner wagon. Was it a promotional item, a shop display piece or was it specially built for one of the LMC Exhibition layouts? 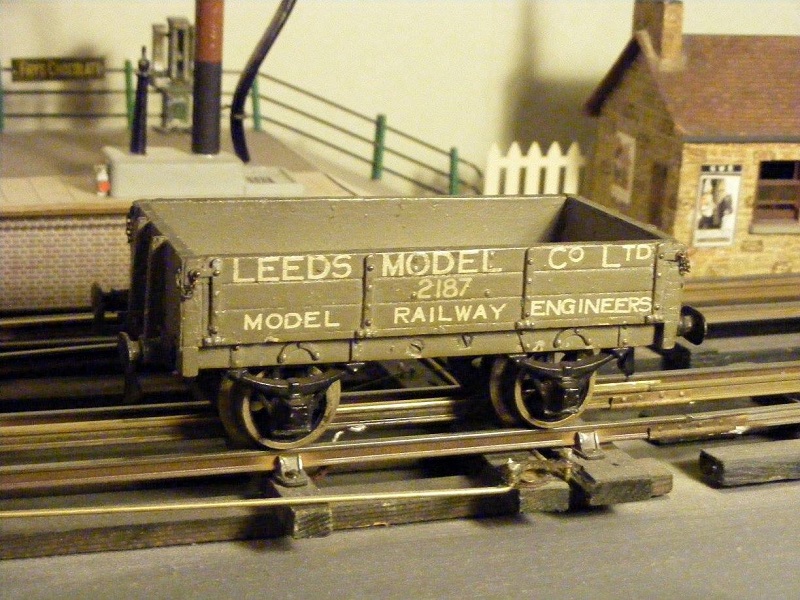 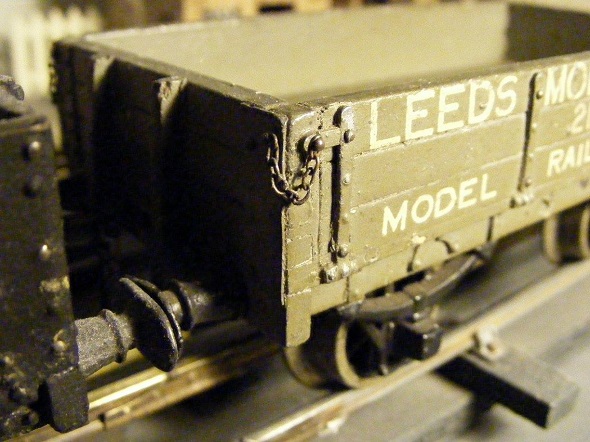 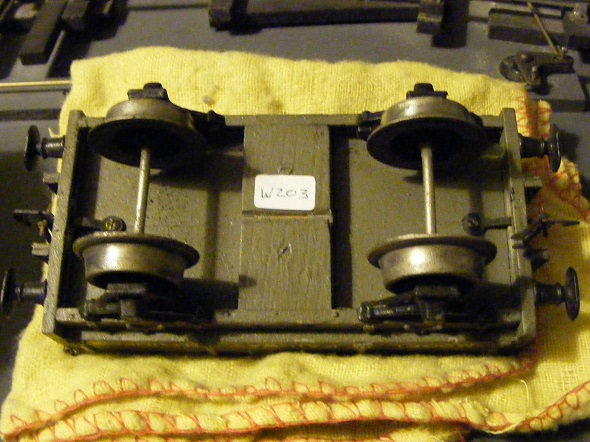 Type B handmade Open wagon 'Engineering Department'. Could this wagon also been specially built for one of the LMC Exhibition layouts? 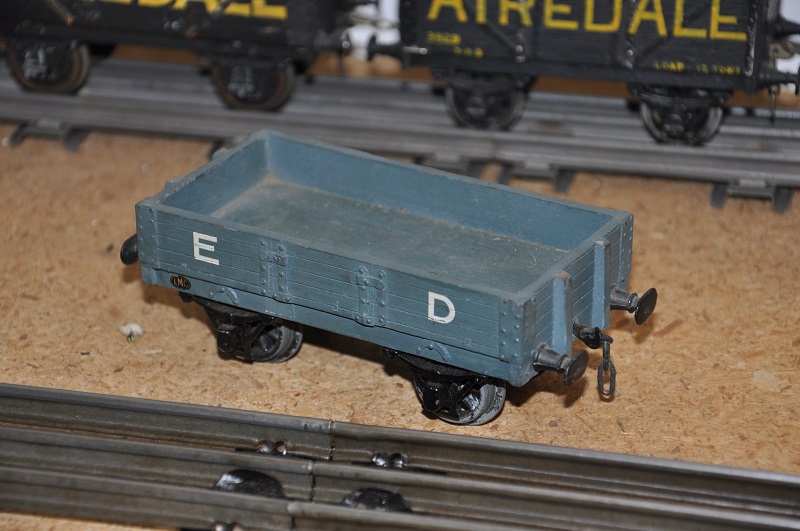 The original lithographed wagon which was made using embossed litho paper overlays on the wooden body. Only one version ever went into production, the N.E.R. 12 Ton Open-Sided Wagon appeared in 1920, but was no longer in the catalogue in 1922, giving way to the much simpler (and cheaper to produce) standard litho wagon range.

The underside is identical to that of the Type B wagon shown above, revealing that this was a standard LMC form of construction at this early stage. The model is heavily varnished and the yellowing of the varnish has made the livery hard to discern, but it preserved the wagon! 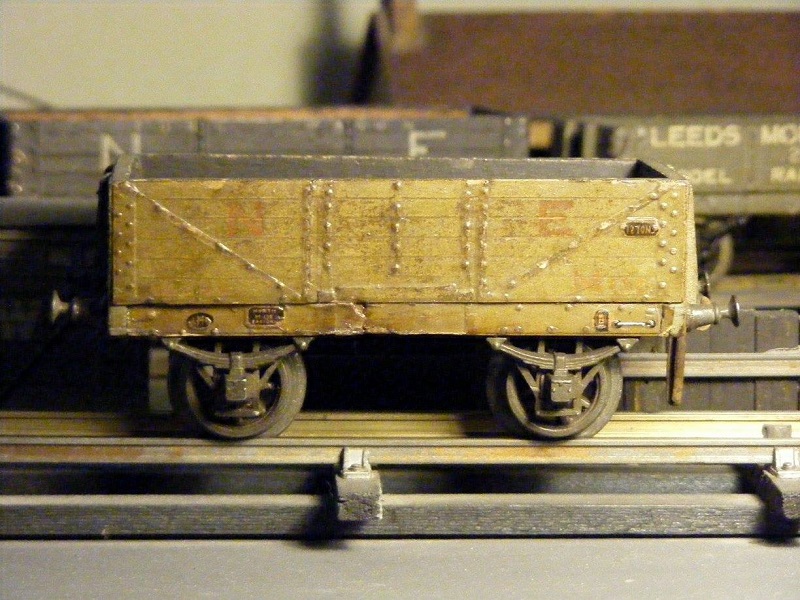 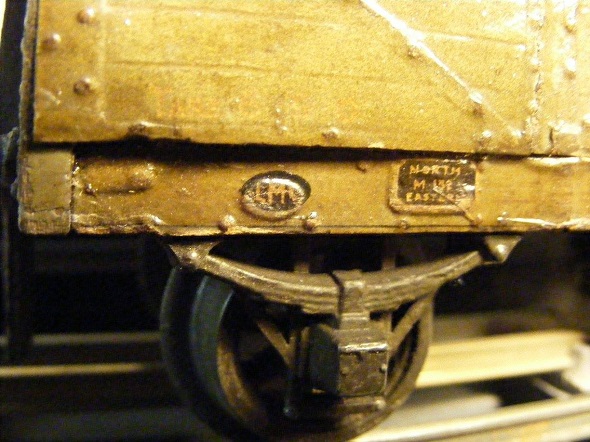 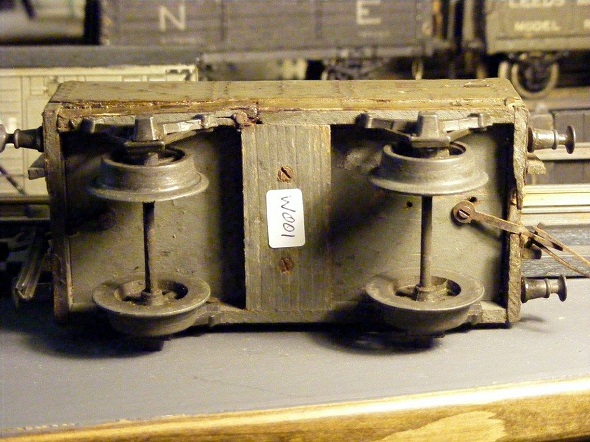 The wagon is certainly a Leeds handmade one. It is exactly the right size in terms of length and width. The overall paint is very likely to be LMC, i.e. it has not been over-painted, and it is flaking exactly as other identified LMC Type B wagons. The big question is the lettering, is it good enough to be LMC factory lettering? 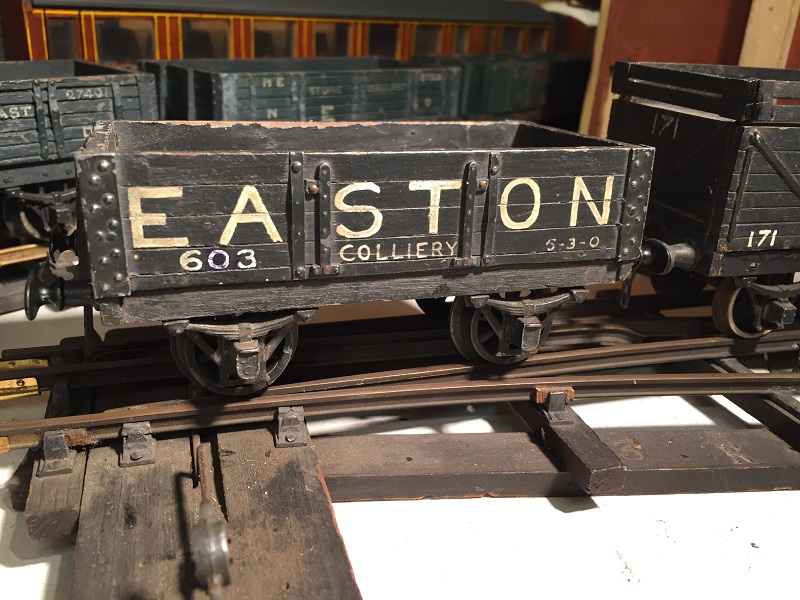 Type B handmade Open wagon 'MRC'. In this instance meaning The Model Railway Club, the original founded in London in 1910 and still going. Question is the LMC trademark. Has anybody seen other wagons with the LMC trademark on the body instead of the solebar? 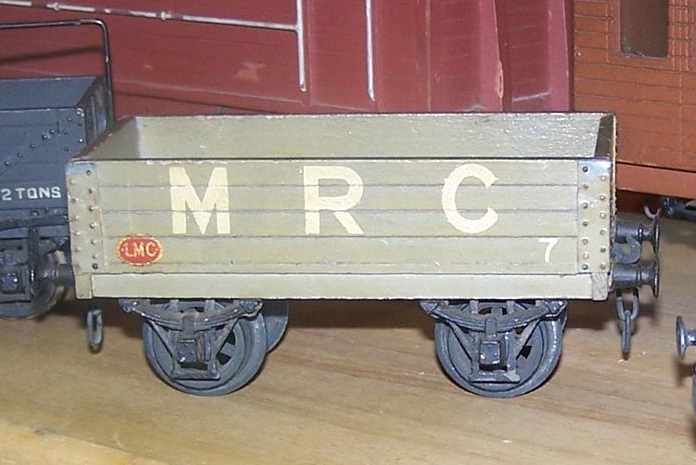 A model from the Type C Super Detail Exact Scale Models series. Could this wagon have been made as a LMC private owner wagon for G.P. Keen's 'K-Lines' layout? 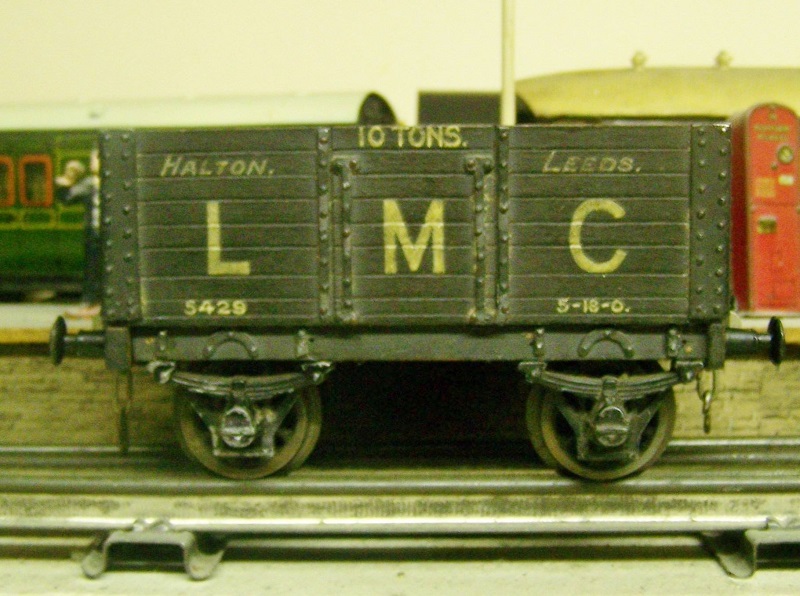 Pre-war True Scale Bakelite Open Wagons are easily identified by the fact that the white diagonal stripe on the sides run the full length of the vehicle, whereas the post-war version has a stripe over only a third of its length. This long stripe usually is 1/8 inch wide, but the wagon in front has a strip which is only 1/16 inch wide.

This is as the wagon is depicted in the 1937 LMC catalogue and this wagon also has the same running number as in the catalogue picture. But there are other differences too: on the wagon with the small stripe the moulded-in drop door on the end is fractionally lower than the sides; on the other wagon - as on the post-war ones - the door is exactly the same height as the sides. Moreover, this wagon does not have the transverse reinforcing ridge in the centre on the underside and the slits in the floor for the fixing tabs of the axle guard brackets have small recesses so that the tabs when bend over lie flat with the floor of the wagon.

Conclusion is that when the Bakelite Open Wagons appeared in 1937 they were with the narrow stripe and apparently some time after the mould was adapted (or a new mould made?) to bring the end door to the same height as the sides, include a reinforcing ridge on the underside and fill in the tab recesses in the floor. 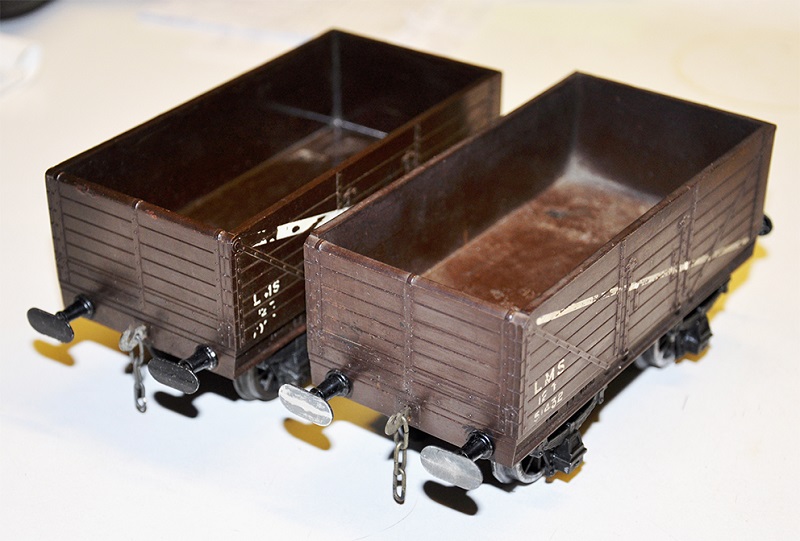 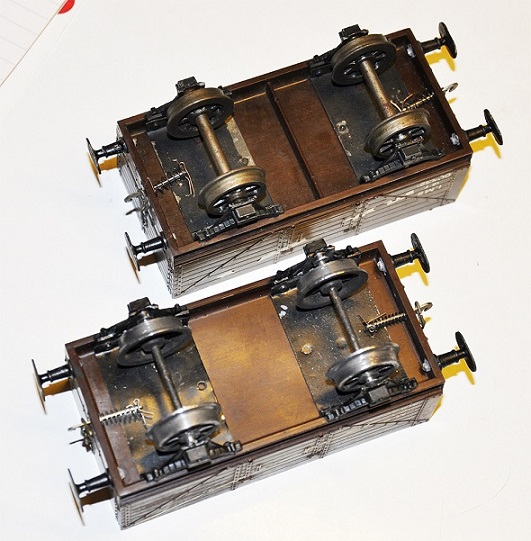