Saturday 9th and Sunday 10th October 2004 saw this year's edition of the Dutch National O-Gauge Days, organised by the Dutch O-gauge contact group, in a new and better venue at a school in Zeist (near Utrecht, central Netherlands). Of course the Dutch HRCA was willing and able to put up some historic tinplate, and show all the modern true-scale fans what a proper railroad looked like in their grandfathers' time.

On the preceding Friday, Niek van Ees and Peter Zwakhals once again took care of building the layout. Now being old, experienced hands at this job, Peter and Niek managed to complete the layout in record time. Despite having to rove through various classrooms to get sufficient tables, they were finished well before any of the other exhibitors. Previous pitfalls were avoided, short-circuits quickly sorted, and time gained to allow more scenery and accessories to be included. Although the layout itself was pure Hornby, some ACE trains were included at the depot for running purposes. And running trains we did, again easily being the noisiest layout amongst those present.

Noise of a different variety was provided by Niek's family, friends and relations, who dropped in to wish him a happy birthday on Saturday. An occasion where we discovered yet another advantage of tinplate trains over modern plastic: a Hornby train will easily run over spilled birthday cake, whereas a modern train will not!

A view of the station area with engine sheds in the background. On the outer (Alan Middleton replica) double track an E320 LNER Flying Scotsman is moving its Passenger train into Windsor station, while on the opposite track an E220 LMS Special Compound, also with Passenger train, is awaiting departure.

The inner circuits we used for the smaller Tank locomotives. Seen here is an E120 LNER Tank with No. 2 Passenger Coaches and a tanker train headed by an E120 LMS Special Tank. 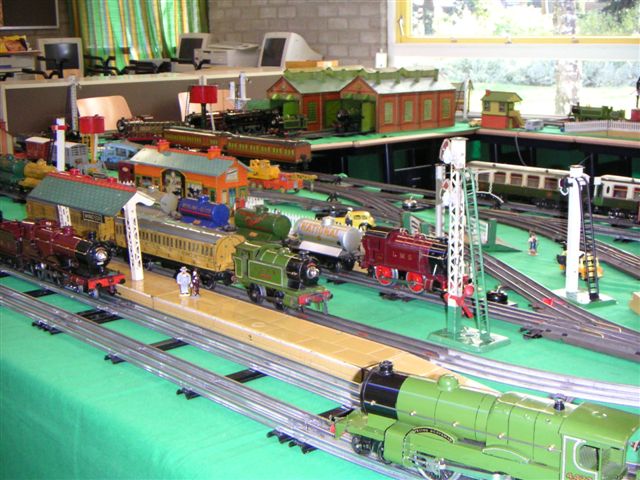 Shunting trains around the marshalling yards was easy with the separate controller we had for this area. The E120 LNER Tank has just been coupled with some No. 2 Passenger stock. 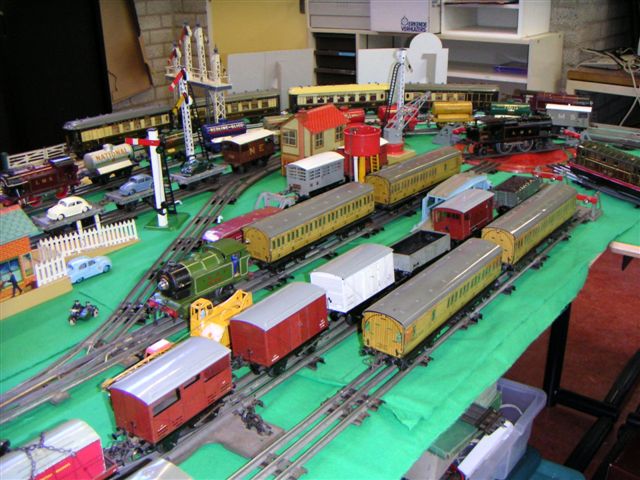 One side of the layout was taken up by the engine sheds with locomotives on display. This time we decided to have a joint LMS-LNER operation as a theme, so most locos and rolling stock sported these liveries.

The few exceptions included an electrified No. 40 BR Tank loco and the Metropolitan train. 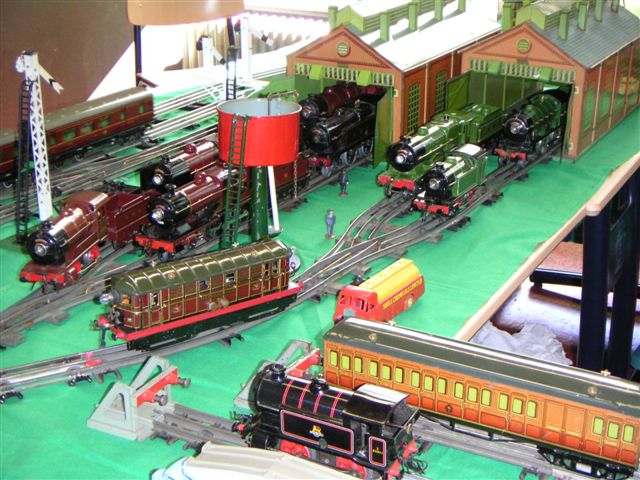 An aerial view of the station area, giving a good impression of how the layout was made up this time. 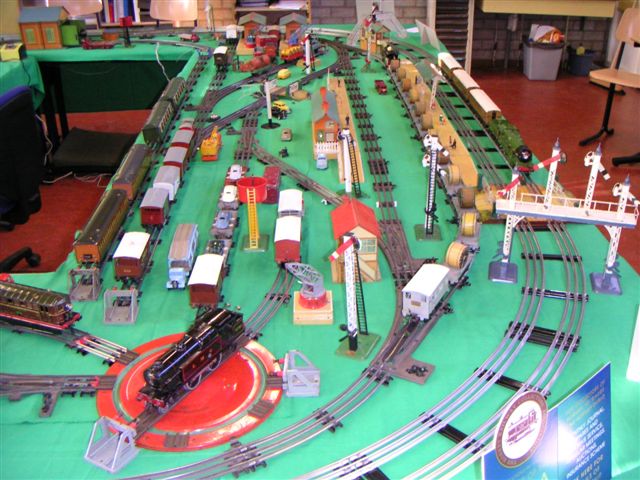 A closer look at the station area. A goods train of Flat Trucks with Cable Drums is just passing by, while the LNER Flying Scotsman has just arrived at the station.

Incidentally, we did realise that any cars and/or passengers crossing this 2E Level Crossing would be falling off the table on one side, or risk being run over by a Goods Train at the other... Thankfully nobody got hurt, and luckily none of the fine-scale brigade noticed it either! 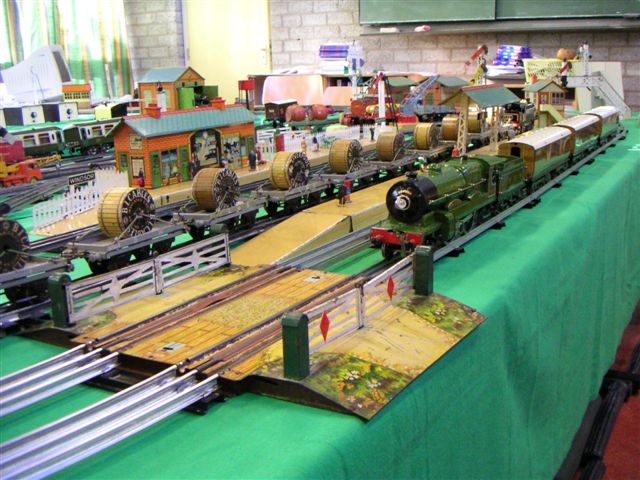 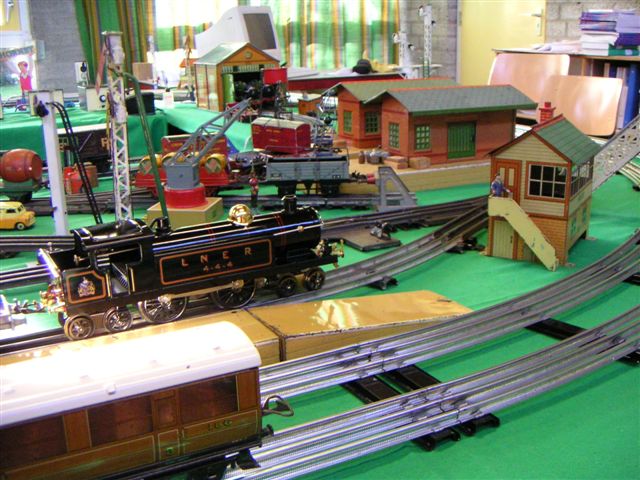 A busy moment at the goods depot, with ACE LNER No. 2 Tank just about to pass Windsor Signal Cabin. In the back a pair of No. 2 Goods Platforms can be seen, as well as the smaller No 1A Engine Shed, where Tank locos found a place. 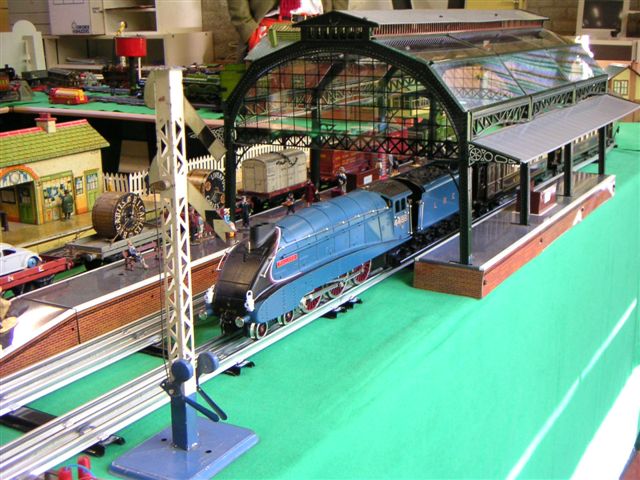 New member Willem Boot brought along his ACE Trains A4 - a first time for the Netherlands to see this new and very impressive ACE product.

The A4 is seen here with the ACE Trains Canopy, hand-painted by Niek van Ees in the old type of green used for mainline stations in Holland. 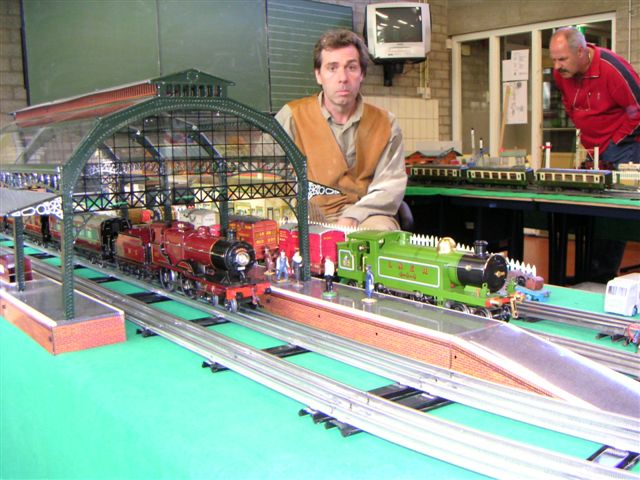 Niek van Ees concentrating on running his trains. In the back, fellow-member Derk de Vries studies a rake of early green and cream No. 2 Pullmans. 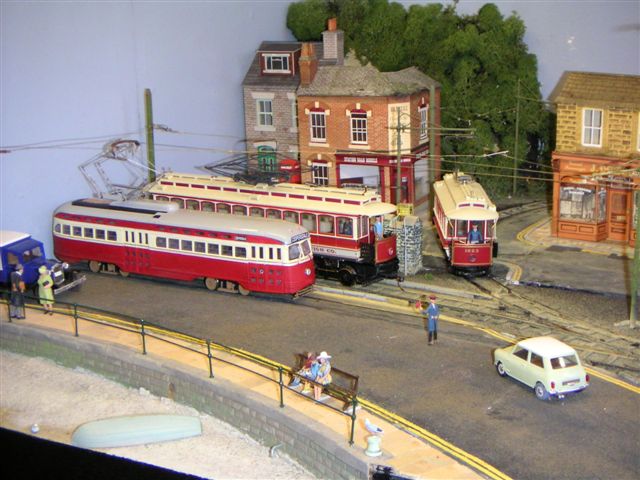 A detail on one of the fine scale layouts. Built by Rob Kievit, this scenic layout in 7mm/ft scale (1:43.5) is based on the actual narrow-gauge tramway on the Isle of Man. There are differences, though: the model is situated on the fictional island of Waan in the North Sea, allowing the builder to include some non-Manx elements.

Such as right-hand running, a couple of Dutch tramcars, and the use of pantographs rather than trolley poles. The trams collect power from the overhead, with both rails acting as return, just like the real thing.

The Manx railway never got around to actually ordering the PCC cars that had been designed as part of an abortive modernisation drive in the seventies. But the management of Waan's tramway acted differently. The PCC is a Corgi Classic model; the other trams seen here are re-gauged and rebuilt Bachmann 0n30 vehicles. This seaside scene was inspired by the electric tramway terminus on the Promenade in the Manx capital, Douglas. 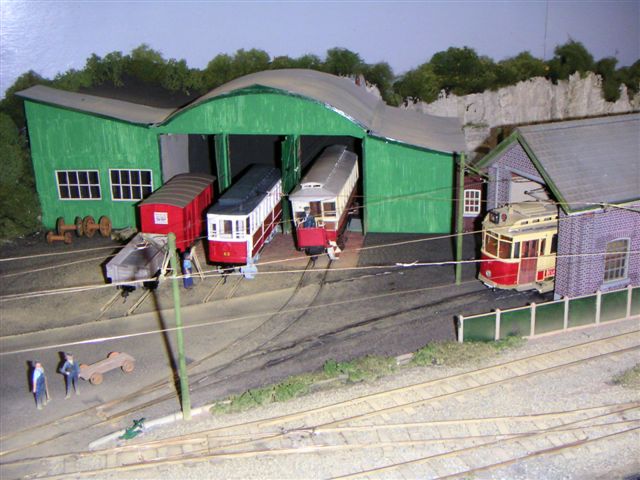 Based on the Lower Sheds at Douglas, the tram depot provides a static display of some trailers and wagons. The two blind tracks in the depot are awaiting completion, which involves the building of two more turnouts.

All track, to 22.5mm gauge, is hand-made, using h0 rail profile on copperclad sleepers. And just to prove that fine scale does not need to involve high costs: The trailer on the central track was concocted out of three Gnomy toy trams, the one next to that is a model of Manx Electric trailer no. 57, scratch built mainly out of cardboard.