The 2014 Dutch HRCA AGM was held on a lovely sunny Sunday 18th May. Barend Westerveld was the host this time. Dutch HRCA members Niek van Ees, Hans van Dissel, Duco Postmaa, Hans Kusters, Paul, Henk Brouwer and our secretary Peter Zwakhals were present at the meeting. Barend has a wide interest in vintage toys. His collecting theme can be best described as transport toys (trains, cars, planes, boats) from makers from Great Britain, France and the Unites States. These goodies are topped off with construction sets of makers worldwide. So lots to see for those members present.

At the entrance of the living room, Barend had set up a display to demonstrate his wide interest in vintage Toy Trains. Starting at the front you can see a Marx LNER Silver Link Streamliner in clockwork, an electric Lionel City of Portland, a Bowman LNER live steam met 3 Bowman Great Western coaches and at the back the Hudson locomotive and tender from a Gilbert Erector set. 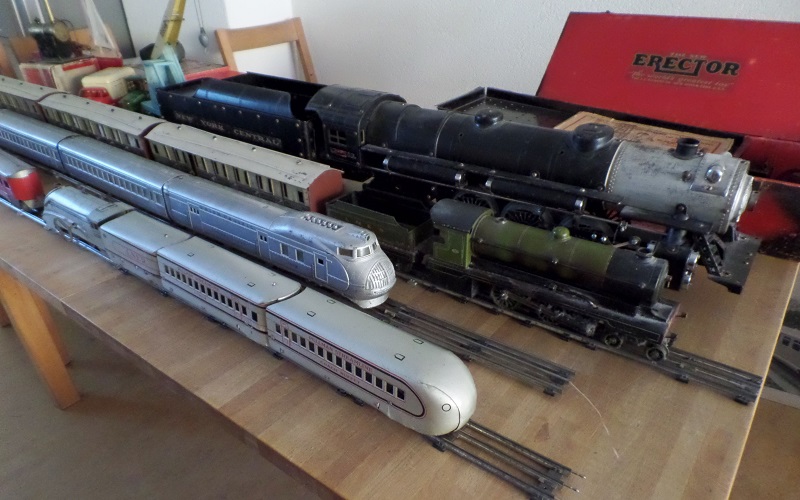 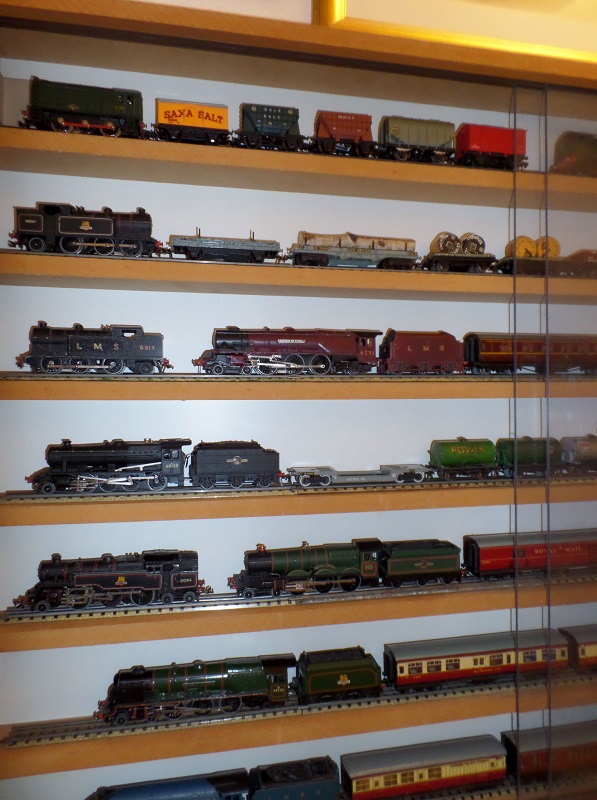 Barend has created a train room which reflects his wide interest in vintage toy trains. The layout has 3 tracks which are all interconnected. As with most train rooms, the walls are packed with loco's, wagons, coaches and related items. 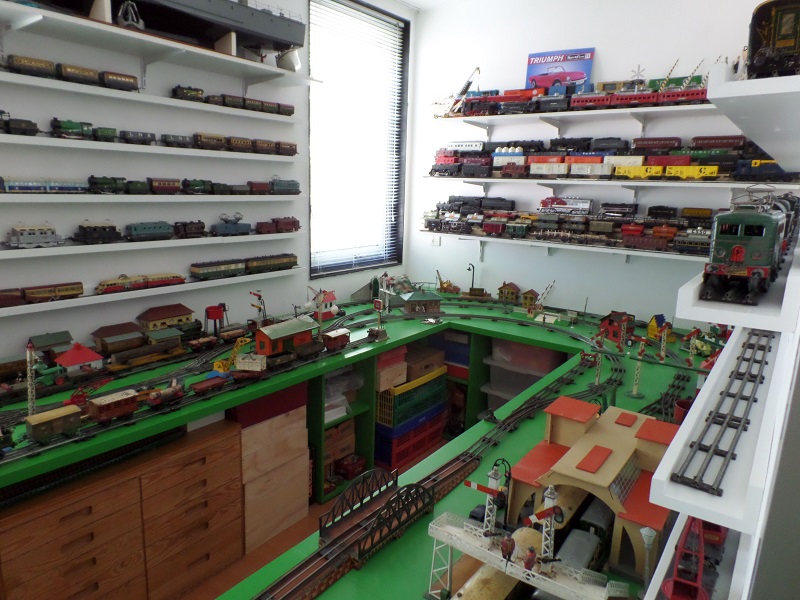 The shelves above the layout are filled with mostly items from the Hornby factory in France. 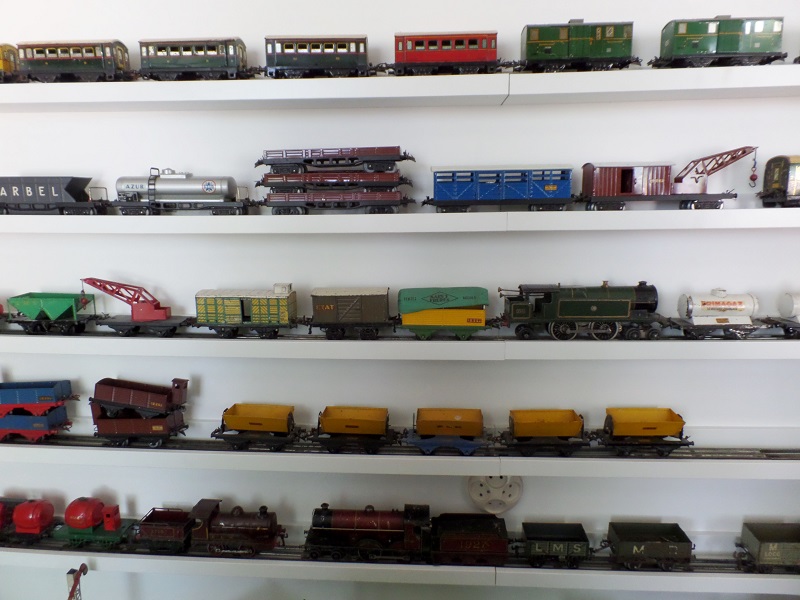 Same on the other side of the room: mainly items from Hornby France, the M-series, but some nice items from British Hornby too, including a maroon Silver link. A Leeds Model Company L.N.E.R. Sentinel-Cammell Rail Car 'Nettle' has found a place too. 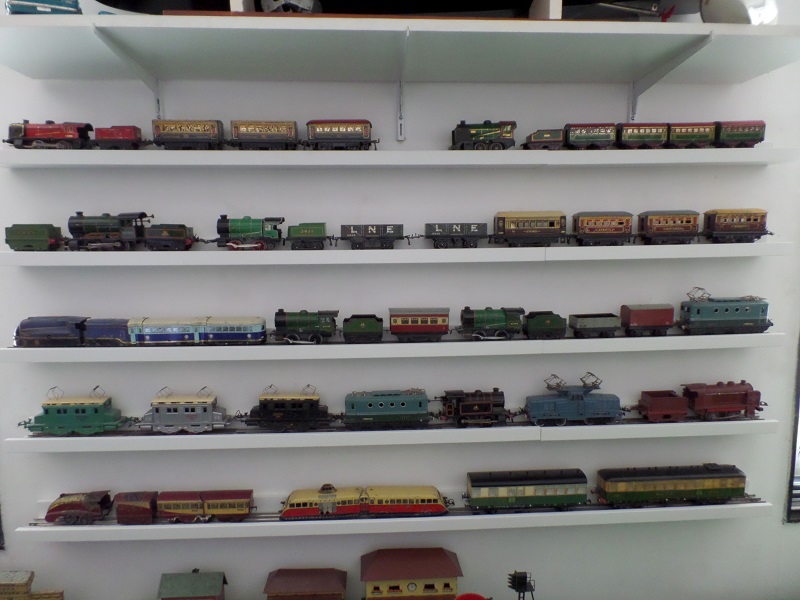 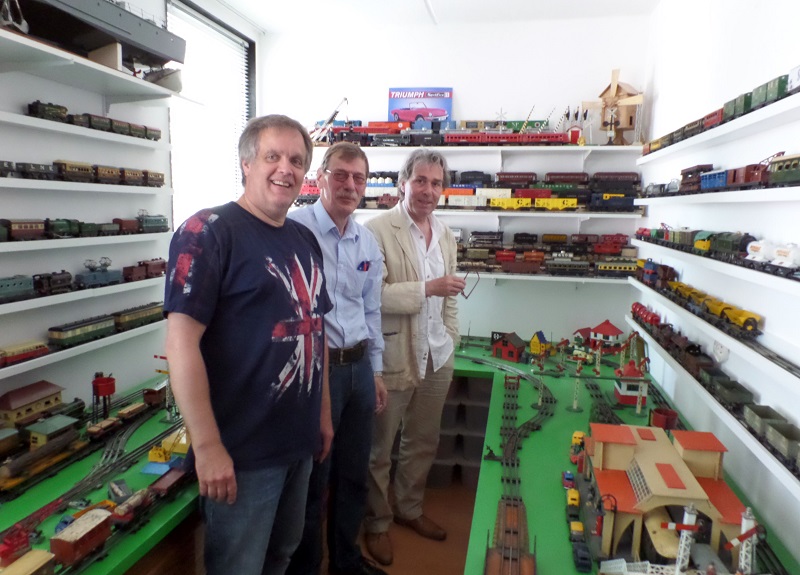 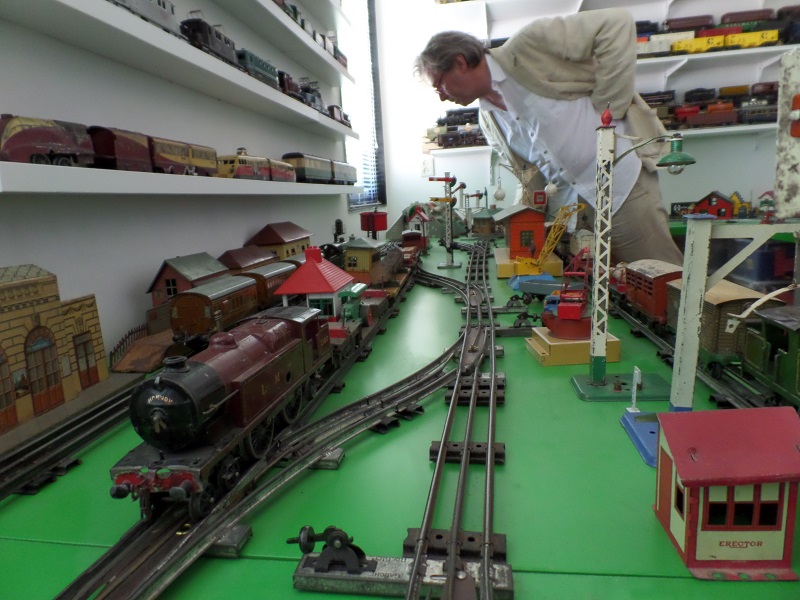 Some details of the point work on the layout. Niek van Ees, being our chief engineer on building the Dutch HRCA layout at public events, is always keen on studying details. 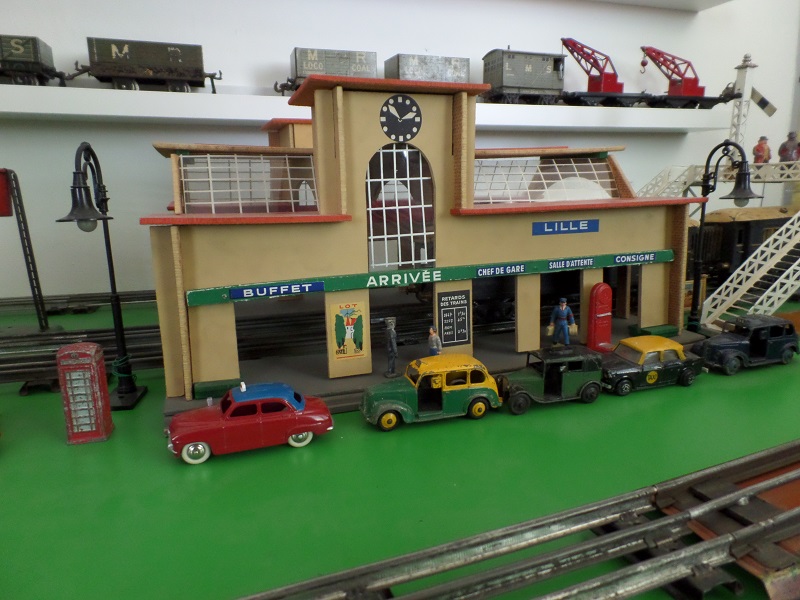 A French Hornby No. 17 Gare démontable 'Lille' (made from 1952-54) is the main station on the layout, complete with scenery for the effect. 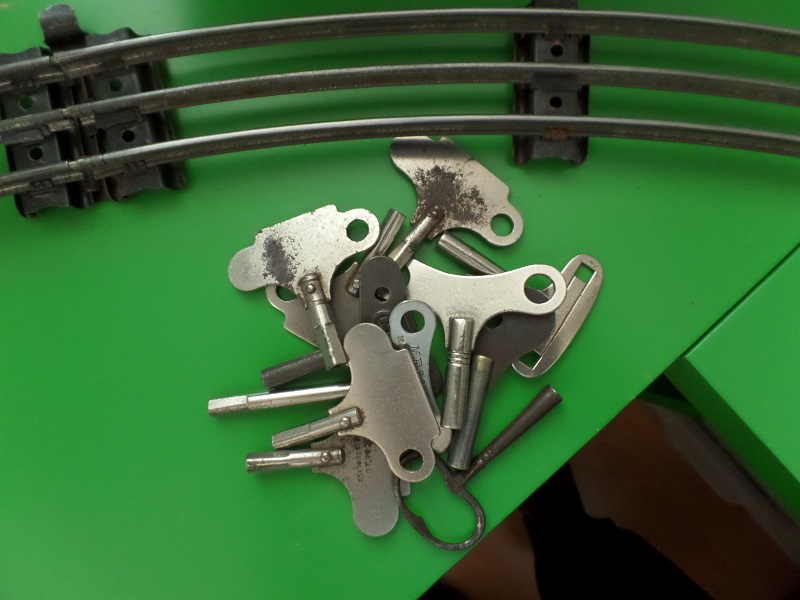 From this stack of keys next to the track, you can tell that Barend is keen on running clockwork trains as well.

After our first tour of the collection was completed we had lunch on the terrace. As usual with the Dutch HRCA AGM, we had a truly sunny day. Starting from the left: Niek van Ees, Paul, Duco Postmaa, Henk Brouwer and Hans van Dissel. 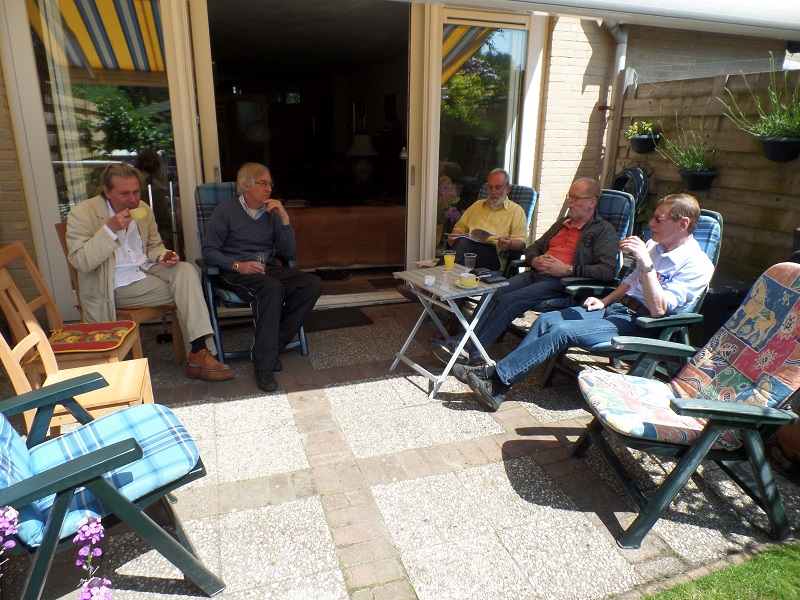 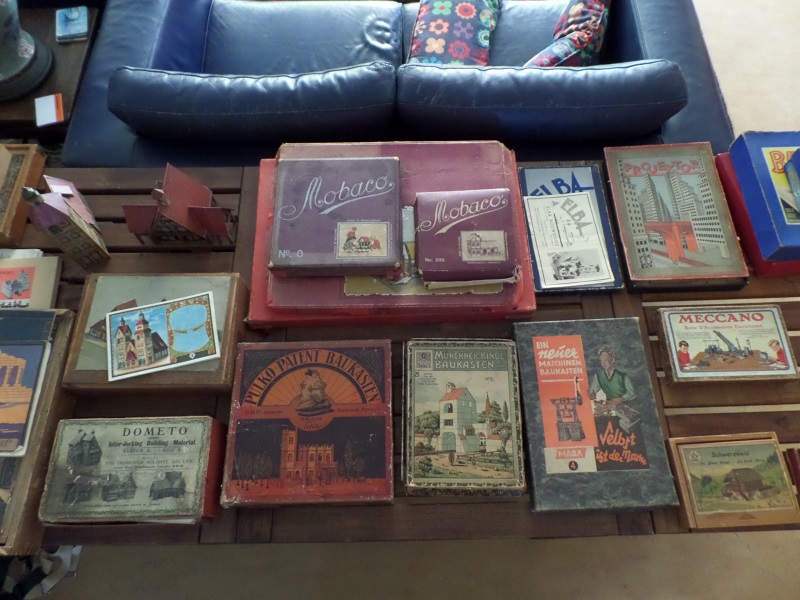 Two very rare 'Mechanics Made Easy' sets, both introduced in 1906. The accessory outfit 1A (upper) is in a cardboard sleeve box. This is a early transition outfit, with both the M.M.E. and the Meccano label. The set "X" (lower) was sold as "Simplex" and was a set intended for starters, with a reduced content and a cardboard box. 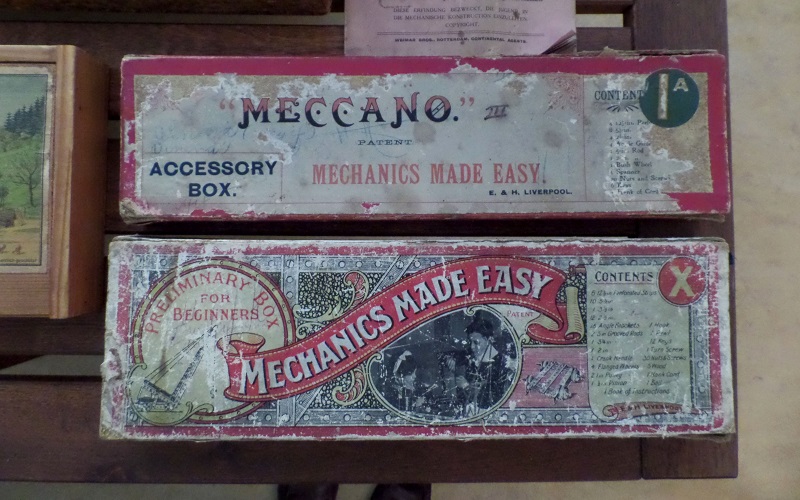 Our Meccano specialist Henk Brouwer inspecting the contents of these very rare sets. 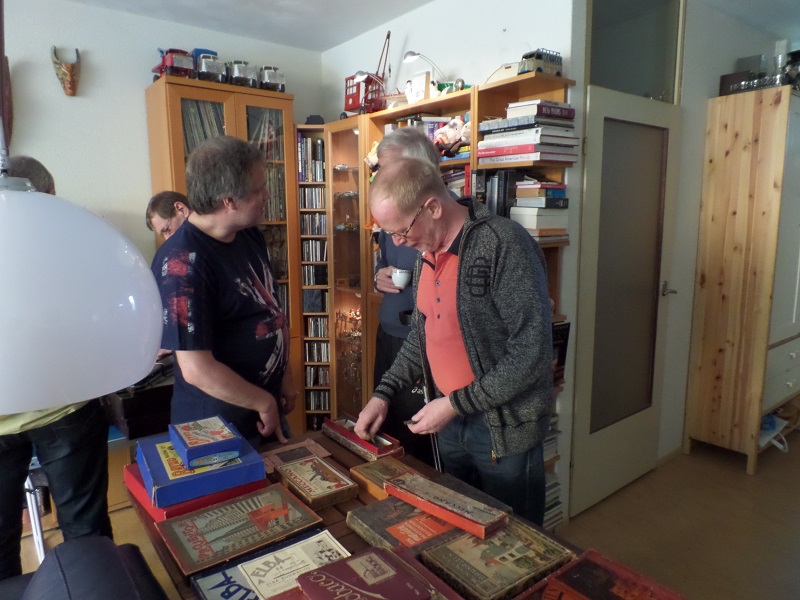 Our host being a fan of all Meccano products and a fan of construction sets means that almost everywhere in the house you can see the models of the Meccano Motor Car Constructor Outfit or the Aeroplane Constructor Outfit, mixed with a Hornby Speed Boat.

And let's not forget the models of transport toys made from Meccano sets. 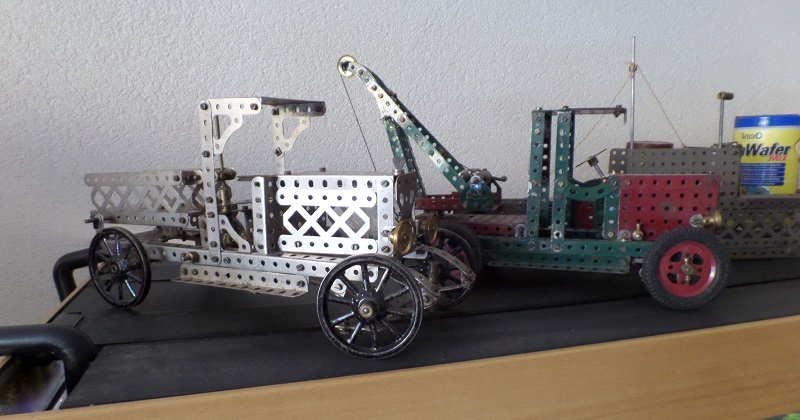 Henk Brouwer had some rare Hornby locos for sale: an E120 Tank Locomotive and a No. 1 Locomotive. Both rare export S.A.S. versions and both recently found in Holland. This proves you never know what will turn up. 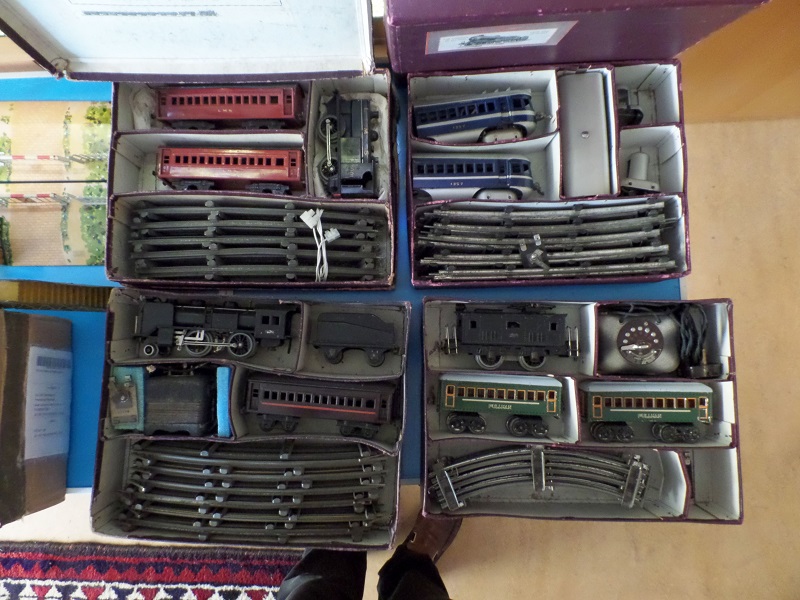 Hans van Dissel brought some of his Seki train sets of the Thirties, which were sold under different names.

Lower right: Seki or Bryant for the American market. 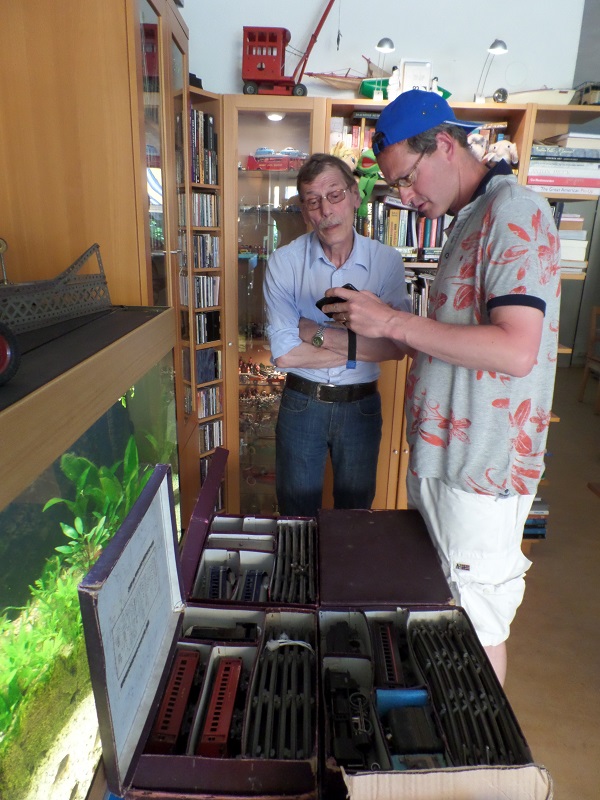 Hans van Dissel explaining the differences in these Seki sets to Hans Kusters (with cap). 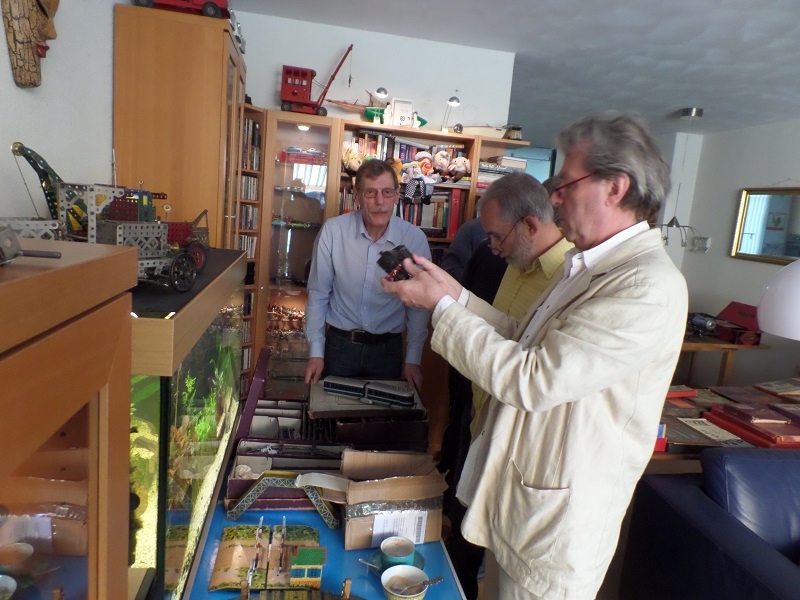 An AGM is hard work for those who take some of their favourite items to the meeting: here Hans is telling the Seki story to Niek van Ees and Duco Postmaa.